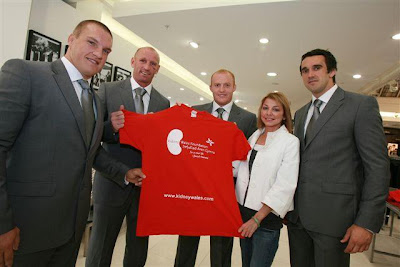 The People Like Us Campaign will coincide with the Rugby World Cup. Allison decided to share her own campaign with the Welsh Team. Allison's partner Nathan is a New Zealander and same goes for Campaigner Andrea Evans whose boyfriend is also from NZ.

Photograph courtesy Stephan Lewis Photography. Many thanks to Moss Bross for allowing Allison to meet the Rugby Stars.

"I was delighted to meet some of the players before they flew to France to start the World Cup. I'm very proud and patriotic about Wales and have followed Welsh rugby since I was a little girl. My brother Barry is even named after Barry John the Welsh rugby player of the seventies. As a family we are avid supporters. My boyfriend Nathan, from New Zealand is a huge rugby fan and is obviously looking forward to the World Cup with the All Blacks being tipped to win!! "
Allison
Posted by Ryder Wave at 9:41 AM