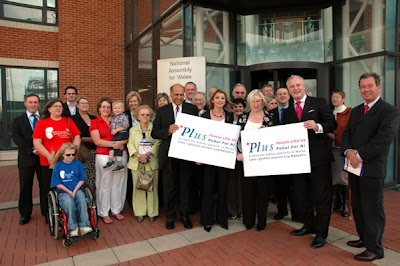 The Wales Health Minister Edwina Hart AM agreed to consider the hard hitting report from the Campaign People Like Us Leader Allison John.

In a meeting with leading politicans from across all parties the Minister said that she would reply to the report but will also look at other areas such as a public consultation on presumed consent.Others who attended included Kidney Wales Patients from KW Children's Unit UHW, BMA, ABPI Renal Committe, Patients from Haverdfordwest , Carers and Donor Families . The Launch featured as lead news on BBC and ITV and was the lead editorial in the Western Mail and other leading newspapers. The Press featured stories from Patients.
Posted by Ryder Wave at 6:25 AM

Randerson Calls for Presumed Organ Donation
Jenny Randerson AM, Health spokesperson for the Welsh Liberal Democrats is pleased that UK Health secretary Alan Johnson has asked the organ donation taskforce to investigate a new system of organ donation which would assume each person is willing to donate organs upon their death unless they have said otherwise. This follows Jenny Randerson AM submitting a legislative competence order on the matter in the Welsh Assembly Ballot. Jenny will resubmitting the Legislative Competence Order on October 3rd.
Jenny Randerson AM, said: "I am glad that the UK government will be looking closely at presumed organ donation
"I was disappointed not to win the ballot last time and get the chance to introduce presumed organ consent to Wales. About 21% of people in Wales are registered as organ donors but over 70% of the UK population have been shown to be willing to donate organs after death.
"Over 400 people died in the UK in 2004 while on the transplant waiting list. It is very easy to say that we should do more promotional work but we have tried that for decades. Other countries such as Spain have implemented a soft opt out system, why can't we?
"Any system would have numerous caveats to cope with religious and ethical concerns and allow for objection by relatives or next of kin. In practice we are talking about people donating organs who want to donate but haven't signed up."
"It is essential we start a debate as this can only go ahead with widespread support."