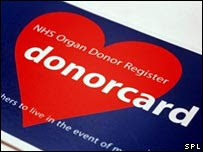 There is a serious shortage of organs in the UK , Edwina Hart said
A series of public debates are to be held about introducing a system of "presumed consent" for organ donation, says the Welsh Assembly Government.
Health Minister Edwina Hart told AMs she wants people to consider Wales moving to an opt-out system.

It would mean everyone would be considered as a potential organ donor at death, unless they had registered their objection.

Charities and people who have had transplants have welcomed the move.

Around three-quarters of a million people in Wales are currently on the organ donor register.

But the gap between the number of organs donated and the number of people waiting for a transplant is increasing, the minister said.

Roy J. Thomas, chair of Kidney Wales Foundation, which supports people with kidney disease and has lobbied for the opt-out system, added: "We believe that if people are prepared to accept an organ for themselves or their loved ones then they should be prepared to give an organ to help save someone else's life."

Last month a survey by the British Medical Association revealed that two-thirds of more than 2,000 questioned felt the UK should move to an opt-out system.

But just over a quarter of the people surveyed said they were on the register.
Posted by Ryder Wave at 3:32 AM