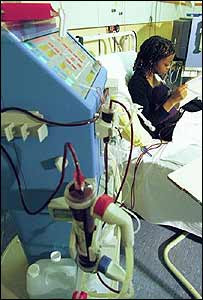 The number of people waiting for a kidney transplant in Wales has risen by more than 50% in the last six years, the Kidney Wales Foundation has said.
Its figures also show there were 431 people on the transplant waiting list at the end of 2007 but only 89 transplants were carried out last year.

The charity said the rise is due to increasing levels of diabetes, heart disease and an ageing population.

The figures were released on the same day a kidney unit opens in west Wales.

The transplant waiting list rise in Wales compares with a 42% increase across the UK.

Kidney Wales Foundation said up to 10,000 people in Wales were now suffering from some kind of chronic kidney disease and these figures were rising.

People with chronic kidney disease are 10 times more likely than healthy individuals to die of heart attacks and strokes.

Sadly, since 2003 more than 100 people have died before getting that second chance a kidney transplant could have given them

Allison John of the foundation said better prevention and early detection was needed in Wales, including screening for at all at risk groups.

She also urged people to join the organ donation register.

"These figures are shocking and reveal the public health threat we are facing in Wales," she said.

"They are especially worrying as the numbers diagnosed with renal failure are likely to increase dramatically again over the next decade with the rise in obesity and the linked problems of diabetes and heart disease.

"There is also a desperate shortage of donors in Wales and sadly since 2003 more than 100 people have died before getting that second chance a kidney transplant could have given them."
Posted by Ryder Wave at 10:02 AM